For the 2017 Orcas Island Studio Tour, I introduced the next permutation of the Lumencot, built as a studio space in 2015.


I called it Lumenwave, and described it as "a disassemble-able cedar laminate framework for a greenhouse, tea house, treehouse, office, studio, guest bedroom, or a free-form space for yoga, meditation, massage, relaxing, or...?

I loved the open-ended potential, suggesting that "maybe it's a greenhouse in the spring, a guest bedroom in the summer, a private retreat space in the fall and winter."

I wrote that I saw "every Lumenwave being a unique combination of size, surface materials, and arrangements of doors, windows and interior play. Multi-layer clear and translucent panels allow for extraordinary, UV-protected light transmission, making them ideal growing spaces for plants and humans alike."

Due this spring is an approximately 8’ x 12’ commission, to be used as a farmstay space in western Washington, near Mt. Rainer. Here's a sneak peek at its progress.

This shows the framing covered in shade cloth mid-Fall, just as the front and rear wall curves were being fitted. The perpendicular jigging wa still installed, but not for long. 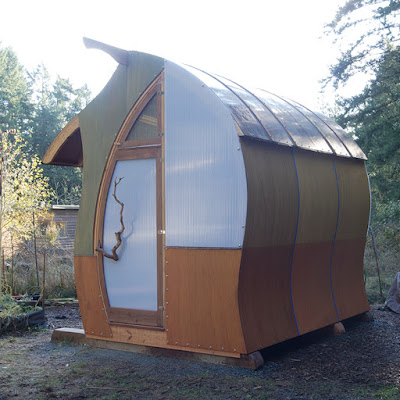 Here it was late-fall, when it was awaiting batons along its edges and panel seams.

It has a patinaed copper roof with cedar batons. 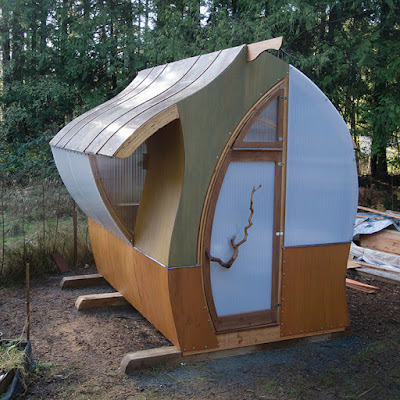 The polycarbonate-skinned bump-out has clear on the ends with opal on the outer curve. One of the things I love most about the translucence is that it not only allows light in, but lets inner light glow out into the darkened landscape like a warm, inviting lantern. 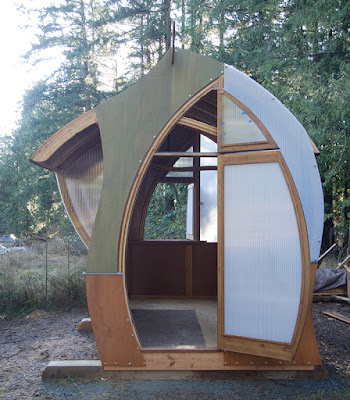 There's a pointed arch that shows up when the door is open, and an echoing effect with the window at the rear.

It's a 9-foot tall dutch door, with the top section operable as a vent. 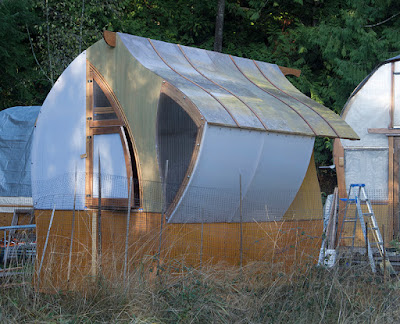 And a view of the back, featuring the soon-to-be glowing side, the window ajar, along with its own venting panel above.

I'd yet to put the ridge cap on. 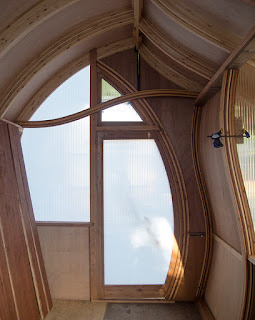 I'll add R23 rock wool insulation to the ceiling on installation, so those laminates and most of the ridge beam won't show. The boeards leaning on the left are the tongue and groove flooring.

Between the light and curves, the inside feels alive.

Come back 'round in a couple of months or so to see it finished!